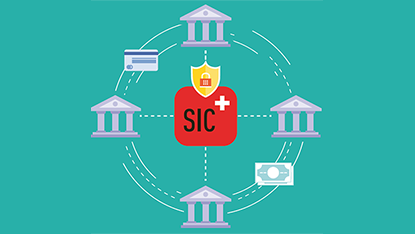 The business with the billions

270 billion Swiss francs. That corresponds to approximately 40 percent of Switzerland's annual gross domestic product. That is also the amount that changes hands on peak days via the interbank clearing system "SIC".

In 1987 SIX Interbank Clearing launched this payment system on behalf of the Swiss National Bank. The ability to transfer money from one account to the next in seconds was unique in the world. After more than 20 years there were fewer and fewer specialists who could maintain the system. It was definitely time for a replacement.

Netcetera prevailed in the international invitation to tender for the major contract in 2011with its proposal for the architecture of the platform and for the actual implementation of the system. The project would be monitored by the Swiss National Bank due to its extraordinary systemic relevance.

Since even the slightest error could mean damage to the economy running into the billions, a massive investment is made in test automation and the system is put through its paces for a year under the supervision of the Swiss National Bank before it is allowed to go live. In 2016, the new SIC system went live – and has proven itself since then with over 700 million transactions annually.